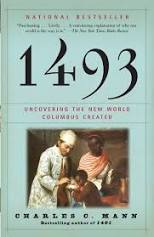 What do Brazil, rubber, and Henry Ford all have in common? How are tobacco, globalization, and earthworms all connected? How do mosquitoes, the climate of Africa, and indigenous biology all influence the beginning of the American slave trade? These are just some of the connections historian Charles C. Mann traces in his expansive, interwoven, and ecological history: 1493: Uncovering the New World Columbus Created.

1493 builds off Mann’s previous best-seller 1491: New Revelations of the Americas Before Columbus. Mann, a journalist and historian, chronicles thousands of years of human and ecological history, focusing mostly on the last 500, demonstrating immense understanding and scholarship across disciplines.

The book is best understood in terms of Mann’s theory, what he calls The Homogocene:the age where societies across the globe are sharing similar resources, biodiversities, agricultural techniques, and cultural practices.

This homogenization, or The Homogocene is the beginning of a better known term, globalization: the age where human societies across the earth become more and more entwined with other countries affairs. This global entwining resulted in an inevitable mixing across culture, ecology, economy and politics that’s become common sense today. This is the Columbian Exchange at work. From 1493 through today, the America’s look more like Asia, Asia more like Europe, and so on. Many of us live in hybrid societies, one might say. Sorry purists.

The potato is one example of homogenization that Mann focuses on. What a fascinating creature the potato is after you understand its course across the globe. Potatoes have seen war and prevented war. They can cure scurvy (Vitamin-C deficiency), and records show that humans have survived solely off potatoes without losing essential vitamins. Adam Smith, the famed economist, believed potatoes were the golden ticket to human progress.

In many ways, Smith was right. Potatoes are one of the most globally consumed and traded foods today. A major portion of Mann’s chapter, “The Agro-Industrial Complex” concerns the potato, especially its battle with a form of algae, or “water mold” called Phytophthora infestans (P. Infestans).

A genderless creature, these molds can reproduce asexually and thrive off members of the nightshade family— plants like potatoes.  Because of the success of potatoes in feeding hundreds of millions of people across the centuries, more and more countries became dependent on the plant, and sometimes, to a fault.

The potato originates in the Andes, so it was inevitable there would be constant travel from the Americas to Europe, at least in the beginning. Potatoes were transported across the Atlantic and ultimately harvested all over western Europe: from Oslo to Paris, to Vienna and Dublin, the potato was truly one of the first global foods. But as we still learn even today, a lack of biodiversity makes species vulnerable to predators, thereby making humans who practice those techniques vulnerable to food shortage, or worse, famine. P. Infestans did just that.

According to Mann, it is believed the potato blight P. Infestans came across the Atlantic sometime in the mid-19th century. Because of the type of globalization efforts happening as a result of the Columbian Exchange, it is in the aftermath of such an exchange that holds the initial marking for major 18th and 19th century famines like the Irish potato famine, beginning in 1845.

Four out of ten Irish ate no solid food except potatoes before the famine. Because of P. Infestans and the Irish’s monocrop diet and agriculture, they resorted to such despracies as eating cats and dogs. The famine ended up leaving over 1 million Irish dead, with many more homeless and destitute. With a world so dependent on the potato, societies left themselves vulnerable to even the smallest microorganism. From the Americas to Europe, the Columbian Exchange left its mark in all the world’s successes and failings from that point forward.

The potato was a prized resource for continents across the globe. Fascinating enough, Mann also traces a correlation between the globalization of the potato and the types of agricultural techniques that we’ve come to know as monocrop agriculture and the use of industrial fertilizer.

Monocrop agriculture, for example, began in Europe with potatoes, credited to Antoine-Augustin Parmentier, the (French) Johnny Appleseed of potatoes.A groundbreaking food, Mann helps us understand that the potato is much more than sustenance: it can serve as a technological, political, and social actor as well.

The potato is just one of many examples Mann uses to demonstrate how remote parts of the world came into association and spread their ecology across the globe; for better and worse. But the Columbian Exchange was more than just an ecological exchange. It was an exchange of human beings. In his final series of chapters, Africa in the World, Mann brings the history of slavery and maroons to further light.

There is much to learn from these chapters regarding the trade of Africans to America and how America was built by the African slave trade. For instance, before the modern invention of race and the beginning of humans relocating en masse (Europeans at will, Africans and Indigenous people at the will of Europeans), Mann informs his reader of the large amounts of inter-ethnic marriages happening at the beginning of the exchange and throughout the 16th century.

Different from how we might view the near 400 years we have been a segregationist society, with Europeans entering the new world, inter-ethnic marriage and children became quite common. Without delving into the consent of these marriages and relationships (there were an uncomfortable amount of young women forced into marriage, as an example), Europeans and Africans now increased the population of the Americas by the tens-of-millions.

By 1570, there were three times as many Africans as there were Europeans in Mexico. As a general rule, Mann points out, “roughly speaking, for every European who came to the Americas, three Africans made the trip.” Between 1500-1840, the heyday of American slavery, it is estimated that over 11 million Africans entered into the Americas. Mann uses Casta paintings as one example to demonstrate the complex racial scheme happening in the first hundred years of Spaniards in the Americas.

One consequence of the large number of Africans coming to the Americas was the inevitable genetic and cultural mixing; and not with just Europeans, but indingeous folk as well. It is through the mixing of African slaves and indigenous natives that Mann emphasizes the agency slaves enacted in their for freedom. These are the maroons.

Maroons are descendents of African slaves and indigenous natives who formed independent, often remote, colonies outside of slave holder control. Their story is one of liberation from the ever present threats of colonization and slavery. So much so that the colonists had themselves a “maroon problem,” or in other words, multiple rebellions.

In the chapter “Forest of Fugitives” Mann traces the history of the slave trade, slave rebellions and the ultimate cooperation between escaped Africans and natives who came to form these maroon societies. Mann tells their story. Like, for instance, an allyship between marrons and Francis Drake, the famed pirate. Maroons and pirates would cooperatively plan and steal from Europeans on and off shore: from silver to sugar and much more.

Maroon societies still exist today— Mann, like the good journalist he is, even travels to a contemporary village and traces their ecology and people back to the Columbian Exchange. Our world always returns to its starting point.

1493 is a heavyweight in global scholarship. It gives a new meaning to the adjective continental. It’s globe-trotting while digging deep into the ecology of local places and connecting them around the globe. It provides empirical evidence to false assumptions about “nature” or what is natural; and it shows that even the places we think of as “wild” are constructed with human agency. Mann answers the questions of how we all got here, why we ended up with this global economy, and what kind of impact humans have on the world.

Now that we know our world, ecology and all, is a product of human hands, we can finally resist waiting for nature to save us and start doing the work ourselves. 1493 is a testament to the engineering work of humanity in the aftermath of the Columbian Exchange: for better or worse.