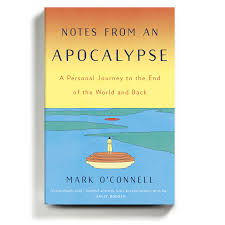 What do Cold War Bunkers in South Dakota, real estate transactions in New Zealand, Elon Musk at a conference in LA, the Chernobyl wasteland, and a wilderness retreat in Scotland all have in common? For Mark O’Connell in Notes From an Apocalypse, all these places are at the center of how humans are handling anxieties about an increasingly inhospitable earth. Whether it be through ecological collapse, asteroid impact, nuclear war, a pandemic, or some other means, there are thousands of people preparing for the worst in a myriad of ways. (Note: The book was written and published before the COVID-19 Pandemic.)

O’Connell investigates his own anxieties vis-à-vis others, tantalizingly intrigued by those around him who share his anxieties but not his despondency . The author weaves together what read like distinct articles, and he unites them under one umbrella by utilizing his own experiences and, most touchingly, his thoughts on the morality of having children in a world that is doomed. Although the end of the world could come from any factor or more listed above, the main focus of his personal narratives is the damage humans have done to the planet. O’Connell’s morose nature stems from the complexity of the problem and his generations abdication of responsibility in solving it. Through these viewpoints of end-of-the-world anxieties and possibilities, O’Connell captures “the apocalyptic tenor of our time.”

First, the author visits preppers and South Dakota Bunkers where he finds a cross-section of manliness and power, measured by a consumerism that O’Connell ironically notes brings this future ever-closer. Interestingly, he discovers these nightmare scenarios often seem to be the fantasy of some preppers, as apocalypse would validate their foresight and superior preparations, giving them a leg up in whatever world they conjure to be the future. Contrary to O’Connell’s own instincts, these people believe a post-apocalyptic world will be an us-vs.-them hellscape, anti-city, anti-minority, and anti-community. These men (the author notes they always seem to be men) romanticize the prospects of going-it alone, hoping to reclaim a time of “feudal paternalism” and an old order that was seemingly banished long ago. While he displays many different vantage points from which to consider cataclysmic world events, he often generalizes and shortchanges preppers in a condescending manner, a tone that came off as unwarranted as I read the book under worldwide quarantine. Although many of the people he met in the book seemed to be fit his typecast of a roughneck, feminist-fearing rebel, it must be noted these meetings are entirely anecdotal and these are arbitrary assertions.

Far from underground bunkers in the middle of nowhere, O’Connell also follows the more luxurious and tech-savvy of preppers who seek to replicate their life of comfort while hiding from the depravity of the end. Some, like controversial techie Peter Thiel, hope to find a paradise relatively removed from the most uncomfortable of ecological disaster zones. New Zealand, an island-nation, seems to be the paradise du jour in apocalyptic prepper circles, and many have bought significant portions of real estate on the island. The New Zealand government has sought to restrict outsider access to the island to ward off speculative buyers, yet its seems like many can slip through by simply applying for citizenship online.

Contrarily, if the earth is due to completely collapse, many look not for an island, or in the ground, but to a new planet altogether. As Elon Musk and his SpaceX project can attest to, besides the obvious capitalistic exploits, much of the impetus behind the privatization of space travel involves colonizing Mars for apocalyptic “insurance.”. The old adage of “not putting all your eggs in one basket” seems to be the driving force here and a Plan-B is not just desirable, but necessary. To underscore his point, the author visits the wasteland of Chernobyl, a most stark reminder of what this planet can look like without humanity to interfere. The plans of these technocrats, however, do not seem to be the last ditch efforts of space settlers for the sake of civilization. Rather, these would-be explorers have grand designs of rebuilding a society largely free from standard government, taxation, and public funds. Despite their promise, a rueful O’Connell notes that these techno-societies seem to put more money and energy into creating a new world than saving the old.

Fresh off these demoralizing visits to view people prepare for the end of humanity as we know it, O’Connell goes on a solo wilderness retreat in Scotland to try and reconnect with nature. The author notes this sort of retreat is built from traditions in countless cultures, particularly indigenous and eastern philosophies, where man is one with and dependent on nature. This runs in stark opposition to many western traditions, especially Christianity, where traditional views during  colonization and the Industrial Revolution held than man was meant to be a master over nature. In a dialogue that brings to mind Charles Mann’s The Wizard and the Prophet, O’Connell notes that all these prepper strategies continue to bend nature to the will of man and save humanity through further technological solutions. In comparison, he asks, what if we just tried to save what we already have?

Through all these illuminating chapters, a persistent undercurrent ties in to every chapter: his own growth as a father. In between trips to bomb shelters and Chernobyl, the author keeps the book poignantly personal – we are filled with readings of the Lorax to his son, childhood nightmares, and a rueful sorrow this generation has laid such dire problems at the feet of its children. Noting the constant bickering and lack of progress this generation has had, O’Connell asks “Is it possible to be terrified and bored at the same time?” We can see the complacency in the author himself as he freely admits the process of writing the book took him on airplanes around the world. Further, he offers little in the way of guidance of what to do today. Still, the concluding chapters are an ode to hope, a completely desperate, yet absolutely necessary, leap of faith that the next generation will be able to rectify the issues their predecessors created.