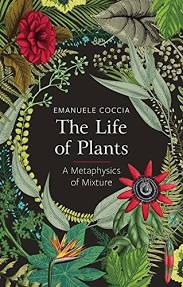 “To live is essentially to live the life of another: to live in and through the life that others have been able to construct or invent.”

The French philosopher Emanuele Coccia begins his book The Life of Plants: A Metaphysics of Mixture with these words, following a similar thread of symbiotic speculation throughout the pages. The Life of Plants is filled with reunderstanding and reimagining how life comes to live in the world, and, beyond that, how life (in its many forms) helps create a world where it and others become mutual agents for change. Plants, Coccia argues, are fundamental for life, and therefore the world.

“If it is from plants that we ought to enquire what the world is, this is because they are the ones who play the world.” Plants provide an especially privileged place in the world– a cosmology unlike any other species. Plants have existed for 480-700 billion years. Plants provide all the organic substances animal species need to live on. Our clothes, homes, diets, furniture and more are all in large part thanks to plants. They provide oxygen, they photosynthesize and they help produce and maintain our climate– the one that’s remained habitable for millennia before anthropogenic climate change.

Because plants are so responsible for producing and sustaining life they are the perfect philosophic specimen in a time of ecological uncertainty. So what is it like to be in the world as a plant?

Coccia is arguing three things about the world through his primary subject. “[The] world has the consistency of an atmosphere and the leaves are witness to this fact. I will ask the roots to explain the nature of the Earth. Finally, it is the flower that will teach us what rationality is… measured as a cosmic force.”

Since there is this mutual relationship, where one subject has an effect on another, the world becomes of a fluid nature. He writes, “the existence of the plant is, by itself, a global modification of the cosmic environment, in other words of the world that they penetrate and by which they are penetrated. It is already by existing that plants modify the world globally without even moving, without beginning to act…To be in the world necessarily means to make world: every activity of living beings is an act of design upon the living flesh of the world.”

Simply by being immersed in a world, plants necessarily shape it. The world must be fluid in order to be shaped.

So what is this shaping? How do plants, as an example, shape the world through their being? “The living being is considered in terms of the type of atmosphere it produces, as though being in the world meant above all to ‘make atmosphere.’” Atmosphere here means the mixture of subjects in a place coexisting together, and not at the cost of other forms of life, but in fact helping support life. Life creates environments who mix in fostering more life. Plants, because they remain the greatest cosmic force on the earth to help produce life, are the prime encapsulation of “life as atmosphere,” of life as mixing to create life, according to Coccia.

This may seem like a trivial point but Coccia’s argument is a counter to the predominant narrative that environments necessarily shape organisms. Plants, through their atmospheric qualities of photosynthesizing, of spreading themselves across the earth, of giving nectar to birds and pollen to bees, shape humans and all other life. We are immersed in an atmosphere of other living beings breathing together to help create and sustain life itself. As his last chapter in the “Leaf Theory” section indicates, “Everything is in Everything.”

Coccia’s second focus is the roots of the plant. He begins with an interesting fact of natural history, claiming that for millions of years plants didn’t have roots. In fact, they were completely dependent on their leaves and trunk to do their world-making. However, with the evolution of roots Coccia examines the ontology of the root system and makes an interesting observation that the plant-with-roots exists in two environments simultaneously: the abiotic and biotic worlds: one world full of light, the other a deep darkness.

Where “Leaf Theory” praises the work of leaves and the job plants do in making the world, Coccia seems to suggest a new form of common sense and cultural symbolism in this chapter; a common sense that does not revel in the root so much, but soaks in the sun. He writes, “Fidelity to the Earth– the extreme geotropism of our culture… has an enormous price: it means devoting oneself to the night, choosing to think without the Sun.” Here one really begins to understand that Coccia is talking cosmologically and not just culturally or biologically: we exist in a cosmos and are immersed in relationships with stars, the Sun, gravity, an ozone, and so on. The world, evidently, is more than just the Earth; the Earth is more than just plants. Coccia wants us to be heliocentric people and mean it.

The final “organ” of chapters discusses the flower. A fascinating and poetic series of chapters, Coccia refers to the “sessile” flower as being a “site of an environment for the world itself.” Or, to put it in a question, how do flowers interact with the world when they are sessile beings? They make themselves desirable to others. But Coccia goes a step further. Coccia likens the flower to reason (logos) itself. Meaning, in a very radical sense, reason is not a uniquely human characteristic, or even animal, but vegetal as well.

Coccia’s reason for making such an argument? It is in the many different forms that flowers take: “Rationality is a matter of forms, but form is always the result of the movement of a mixture that produces variation, change.” Flowers take their form through a rational, a sexual exchange with other beings; making themselves “a site of an environment for the world itself.” Reason, in this sense, is the ability to interact, absorb, and develop with the world; not just to think like a human being does. Reason requires an understanding of the world– a flower understands itself and the world around it.

Like any good philosophy book, The Life of Plants is better on its second read. Once the reader can grasp Coccia’s lexicon and understand  his reconceptualization of biological and meteorological terms like ‘climate,’ ‘atmosphere,’ ‘breath,’ the text will jump out as really being a book about life from a “plants experience in the world.” Grasping the language is always fifty percent of the struggle in any philosophy book. From there, Coccia’s symbiotic thinking can be used as it relates to the philosophical underpinnings of the natural sciences, or the role of philosophy in intellectual culture and education, or even how political ecology movements can think of themselves. A deeply fascinating piece of conceptual work that requires the reader to think through the life of plants in order to understand the world around us.