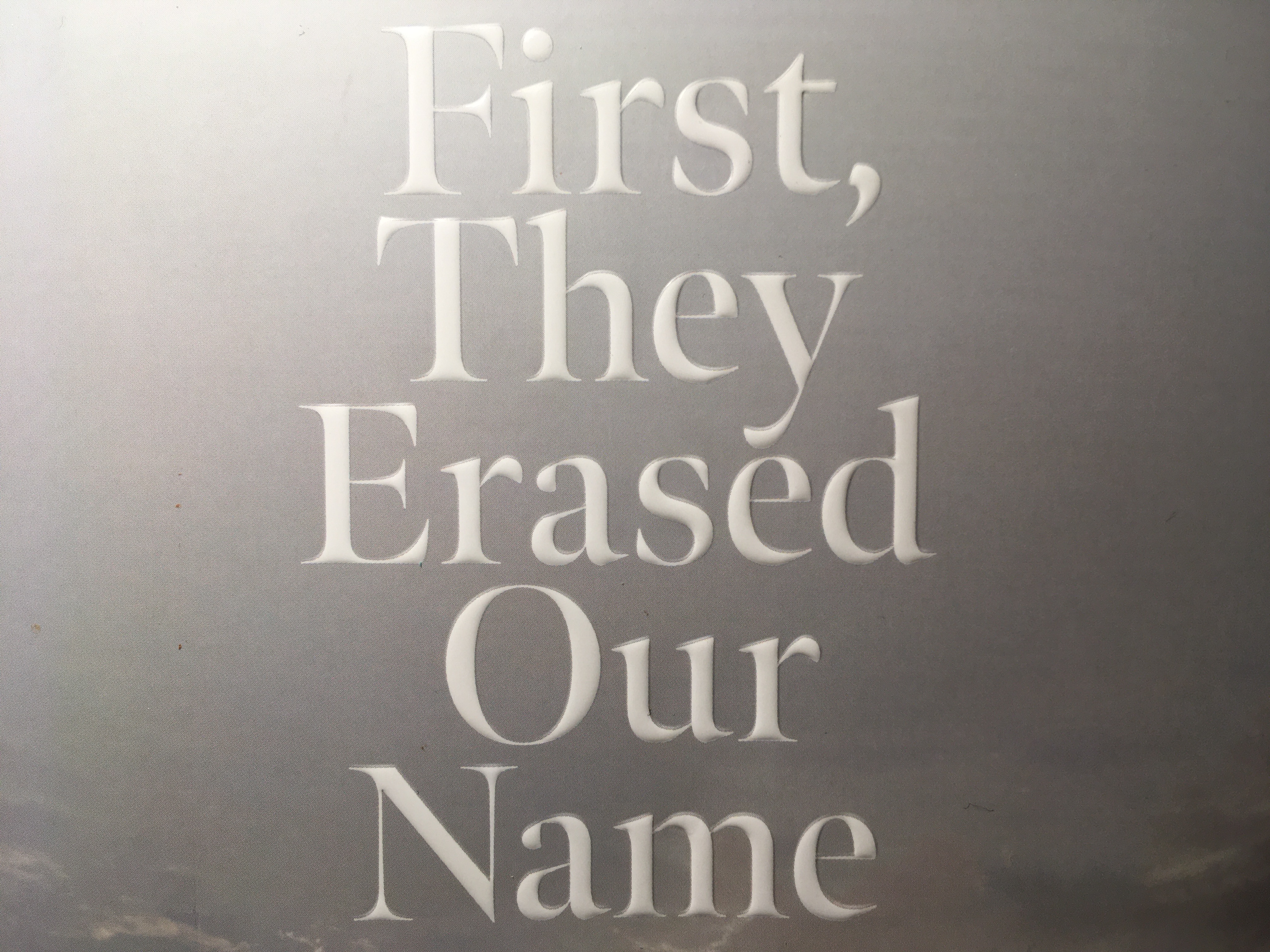 TEN years ago I volunteered as an English as a Foreign Language tutor for a refugee resettlement agency in central Pennsylvania. During that time I worked with a Christian Karen family from south-eastern Myanmar*: father, mother, and their nine month old son who had been born in the U.S. One day a week, after I finished my job at the local bank, I would go over to their tiny apartment to teach them for an hour. Although they come from a different ethnic and religious group, I couldn’t help but think of them as I was reading First, They Erased Our Name: A Rohingya Speaks by Habiburahman, a harrowing memoir detailing the “slow genocide” of the Muslim Rohingya people in western Myanmar. In First, They Erased Our Name Habiburahman (known as Habib), with the help of journalist Sophie Ansel, tells the story of his life as a Rohingya in Myanmar, his flight from his home country, and his subsequent life as a refugee. Reading about Habib’s life experience was like watching a decades-long train wreck of persecution culminate in what can only be called a genocide.

*Note: Both the names Myanmar and Burma are used in the Burmese language. Burmese has vast differences between its spoken and written forms. This difference can be compared to colloquial language versus formal language in English. So in Burmese, Burma (Bama) comes from the spoken language while Myanmar (Myanma) comes from the written, literary language. There is no end of controversy surrounding which name should be used. I’ve chosen to use Myanmar since that is the name Habiburahman uses most often in his book.

A tyrant leant over my cradle and traced a destiny for me that will be hard to avoid: I will either be a fugitive or I won’t exist at all.

The Rohingya are a Muslim ethnic minority in Myanmar that have lived in Arakan, a western province that borders Bangladesh and the Bay of Bengal, since at least the 10th century CE. Habib summarized the history of the area as “a land of Buddhists and Muslims, with many pagodas and mosques, […] independent before it was colonized by the Burmese, then the British.”

Although there is a long history of cooperation between various ethnic and religious groups in Arakan, for the past sixty years, the military has engaged in operations to “cleanse” Myanmar of “Bengali invaders,” a euphemism for the Rohingya. Habib lists these operations, with names like “Pure Gold,” “Purify and Whiten like the Jasmine Flower,” and “Clean and Beautiful Nation,” and describes them for what they are: “manhunts, massacres with poetic, fanciful, warlike names that bestow glory on those who perpetrate them.” Poignantly, Habib tells how in 1996 Rohingya laborers “are forced to dismantle each stone and each piece of teak” of the centuries old Sandhi Khan mosque. He continues to state that the mosque “was a memory that had to be erased so that the history of Arakan and Myanmar could be rewritten by those now in power. […] The mosque no longer exists, the slate is wiped clean, and history begins anew.” Over the decades the Rohingya have watched as their cultural and religious history has been erased. They have had their property confiscated and have been forced to live in segregated neighborhoods. They have been arrested for arbitrary reasons, raped, tortured, and killed by the military and their neighbors alike.

In 1982, Habib was only three years old when a new law redefining Burmese national identity took effect. The law stated that to retain Burmese citizenship a person must belong to one of the 135 “recognized ethnic groups,” and the Rohingya were not recognized. He explains that “with the stroke of a pen, our ethnic group officially disappears.” Across Myanmar “an outlandish tale takes root by firesides in thatched huts […]. They say that because of our physical appearance we are evil ogres from a faraway land, more animal than human. This image persists, haunting the thoughts of adults and the nightmares of children.” From the mid-twentieth century to the early 2010’s the groundwork was insidiously laid, paving the way for a broader campaign of genocide.

I don’t feel hatred, because I understood a long time ago that hate serves no purpose, it is just stupid and belittling to those who feel it.

Through all of the hatred, racism, and physical violence he had to endure, Habib managed to excel in his education. He was among only four Muslim students at his secondary school of thousands. In a memory echoing school integration in 1950’s and 1960’s America, Habib recalls:

When we enter the building for the first time we’re met with contemptuous and hostile looks. We have to act meek. We carry on walking, pretending to be impervious to the sneering.

After passing his high school exams, Habib was able to enroll in university courses in Yangon by obtaining a fake identity card to hide that he is Rohingya*. Although he was able to hide his “illegal” background on paper he could not hide the obvious – his dark skin.

*Note: Habib was able to effectively pass himself off as a member of the Kaman ethnic group, Muslims who are officially recognized as an indigenous ethnic group in Myanmar and have thus retained citizenship.

The word kalar, a “pejorative term expressing scorn and disgust for dark-skinned eithnic groups,” was constantly on the lips of the ethnic Burmese around him. As a young child, Habib received a version of The Talk from his father after returning home late. His father explained,

You are Rohingya, Habib. You must not play with just anybody, anywhere and anyhow. You must know your place. You have to be more responsible than children from other ethnic groups. You are not like them.

I was struck by how heartrendingly similar it seemed to conversations that parents of black and brown children in the U.S. must have with them about staying safe when dealing with police or just being in a public space. In fact, I found there were many similarities between the treatment of the Rohingya and how our current government has characterized people of color and immigrants. While it would be a false equivalency to compare the genocide of the Rohingya to race relations in the U.S. today, it is not difficult to turn back the pages of history to find a time when the comparison is apt. Nor is it difficult to imagine how disparaging and dehumanizing statements about migrants and people of color today could morph into violence on a larger scale (unfortunately, we’ve already experienced such violence and terror in the form of racially motivated mass shootings and the immigrant child separation policy).

This book is not only my story. It is the chronicle of a genocide.

A few years ago it was hard to miss news stories about the persecution of the Rohingya in Myanmar. The stories of indiscriminate violence, hiding in the forests, fleeing to neighboring countries for refuge were heartbreaking, but until I read Habiburahman’s memoir I never realized the prolonged history behind these horrors. The news cycle has moved on since then, but the harsh reality endured by the Rohingya remains. Now living in exile in Australia, Habib wrote his story so that “the truth one day [will] be known and a light shone on our tragedy, the hidden history of Burma.” This book is a difficult and emotional read. Habib’s personal tragedy gives us insight into a particular atrocity, but it also serves as a powerful warning against narratives of hatred, racism, and fascism within our own country. First, They Erased Our Name is an eye-opening journey into the making of a genocide, told from the point of view of a man who survived the odds stacked against him.

First, They Erased Our Name:
A Rohingya Speaks
by Habiburahman with Sophie Ansel
translated by Andrea Reece

One thought on “Habiburahman’s First, They Erased Our Name”