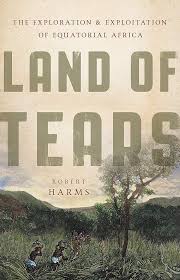 In Land of Tears, Yale historian Robert Harms ties together the Arabian, French, and Belgian “opening” of the Congo River in the interior of Africa in the late 19th-century. Historians have previously studied the Belgian, French, and Arabic settlements as individual, independent entities. Harms argues, however, that these settlements were more reliant on and reactive to one another than historians have previously given them credit for. The interconnected history is a much more introspective read – one that allows us to travel from the Congo to Paris, from London to Brussels (and even in Harm’s backyard in Connecticut) in the late 19th-century. Harm’s talent is achieving this feat without the reader feeling as if they are in a globalization tailspin of actors and actresses.

The three main sources Harms uses are Henry Stanley Morgan, an American explorer working for King Leopold of Belgium, Pierre Savorgnan de Brazza, who was employed by France, and Tippu Tip, a governor-type figure for the Sultan of Zanzibar, a tiny microstate off the eastern coast of Africa. These three men would carve out claims on the interior of Africa through diplomacy, force, economic pressure, and outright exploitation and chicanery, although to different degrees and often without the intent of the devastation they would cause.

The initial chapters of Land of Tears are a foray into equatorial Africa pre-1870. One of the first motifs Harms addresses is the pervasion of Africa as the “dark continent” by turn-of-the-20th-century chroniclers who described the interior of Africa as a land of cannibalism, isolation, low economic activity, and demonic religious practices. 19th-century Europeans frequently cite the laziness of the men in African societies and the lack of developed government/civic/religious institutions as proof of the backwardness of indigenous cultures. (Researchers of Native American history will undoubtedly find similar charges against the indigenous peoples of America.)

The leaders of the incursion into Africa argued that westerners could bring Civilization, Christianity, and Commerce to the continent. (These buzzwords are really just cover for pillage, exploitation, and rape of the land, but shhh.) The Atlantic slave trade had receded throughout the early-to-middle 19th-century and altruistic statesmen saw African slavery as their cause du jour, justifying their presence in the region and intrusion into domestic affairs of the faraway communities, although these were largely pretenses for economic ambition and enrichment.

(Slavery did exist, but it was demonstrably different than the American version I was most familiar with. Harms reports there were four classes in the interior of equatorial Africa. The first were rural slaves who worked the land for owners. Yet, these workers had days off to grow their own food for themselves and their family and could take a food surplus to town for sale. A second group, urban slaves often working as porters – split pay with the master.  Concubines was a third class whose descendants could inherit rights to a plantation of and even become sultan. A fourth category – trusted guards of powerful men, could rise to power in a sort of meritocracy.)

Harms demonstrates that there were dynamic systems of land use, trade, and economic mobility already prevalent in the region prior to 1870. For instance, small African power brokers had developed boundaries and trade areas through centuries of barter, war, and utilization of the natural geography, allowing various ethnic groups to control divisions of the Congo River, sending goods (including slaves) east (to the sultan in Zanzibar) or west (to Atlantic ports) depending on price and ease of transport.

The bulk of the book, however, covers the destruction of the Congo basin by European statesmen and explorers acting under the guise of humanitarian missions. One particular chapter Harms calls the “Torrent of Treaties” shows in heartbreaking fashion how quickly African leaders lost control of their realms as European powers raced to claim their stake in the region. Perhaps the most famous conference to decide the fate of Africa was the Berlin Conference in 1884-85, a farce that allowed European nations to rape the continent of resources by developing a system where European nations exercised control over the region. No African states or leaders were represented at the convention.

The stories, as in any slave/colonization narrative, are utterly gut-wrenching. Here, Harms describes the implementation of concession companies, groups formed with the sole intent of maximizing the procurement of rubber. (Ivory, the main focus of earlier exploitation, had become too rare to provide consistent revenue.) The stationary Europeans resorted to drastic measures to force the locals to acquire the product, forcing rubber frontiers to shift further and further from their permanent posts. The extensive travel to active vines made village life unmanageable, yet Europeans showed no compassion when villagers were short of their quota. Sometimes the commissioners of the concession companies would shoot an “employee” dead on the spot if they showed up with less than necessary, other times they would hold the women and children of a man captive until the quota was met.

Still, despite these ubiquitous harsh methods, King Leopold authorized a Colonial Exhibition in Tervuren in 1897 where happy Congolese paraded around the Belgian city, supposedly thankful for the opening of Africa to the rest of the world. Despite these charades, some in the European community were still wise to the worst of European colonization. A young French philosophy teacher remarked in  1909 that the land reminded him of the ‘Land of Tears’ in Dante’s Inferno, recording “Abandon all hope; rivulets of blood; land of tears; abyss of pain; regions of eternal grievance…For as long as I live, I will retain the sadness of having seen a genuine hell with my own eyes.” Harms derived the name of his book after this description, written less than a generation after the Europeans had even mapped out the area.

Harms bounces back and forth between the actions of de Brazza, Stanley, and Tippu Tip, and while on the surface this may seem confusing to the reader, it is the only effective way to demonstrate the way each was acting within the ripple effects of the others. Land of Tears is meticulously researched and uses the journals of a bevy of explorers, commissioners, statesmen and soldiers to convey information to the reader. While the sources tilt decidedly toward European origin, Harms uses ethnographical and anthropological research to fill the void left by the loss of African primary sources. The result is a ‘glocal’ work similar to Harm’s previous work The Diligent – a piece that focuses on local transformations within global contexts.