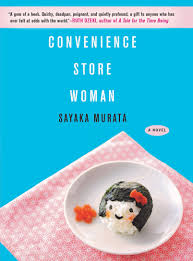 The aptly titled Convenience Store Woman is Japanese novelist Sayaka Murata’s tenth novel, and the first to be translated into English. The story focuses on Keiko Furukura, a thirty-six year old single woman who works at a ‘Smile Mart’ Tokyo convenience store. Furukura is not only content, but happy with her life as a convenience store worker, much to the chagrin of her family, friends, and coworkers who constantly try to convince her to get a better job, or at least get married.

For the past eighteen years Furukura has worked stocking shelves, greeting customers, and running the cash register. There is a set order to her days and she finally feels like she has a place in society. Her family and friends cannot understand her desire to stay “stuck in the same job” or to abstain from sexual relationships, and they attempt to steer her in the directions they think her life should go. Furukura admirably resists their interference and resents that people think her lifestyle choices are “strange.”

Then Shiraha, a disaffected, sexist young man, comes to work at the convenience store. Shiraha is the ultimate stereotype of misogynistic thinking, admitting he only wanted to work at the store in order to find a wife and constantly making rather humorous references to how society hasn’t changed since the Stone Age. Furukura recognizes his rude absurdity but is unfazed by it. Instead she sees an opportunity to stop unwanted scrutiny about her own life and eventually “adopts” Shiraha, letting him live in her apartment. This arrangement seems like it will work for both parties since, to outsiders, it looks like they have both capitulated to societal pressure to settle down into “normal” partnered life.

Though short, the book functions and can be read on several levels, from universal to specific:  it’s a study about how everyone, to a greater or lesser extent, tries to fit into social constructs; it’s a critique of capitalism, toxic masculinity, and the double standards to which women are often subjected; it “eviscerate[s] three of Japanese society’s most sacred cows: marriage, the workplace and the strained concept of the ‘normal’ life”; and it’s also a wonderful representation of one likely autistic character. These universal themes are explored from the viewpoint of a woman who has been conforming to fit into society for her entire life. She’s an outsider looking in, an anthropologist if you will, calling things as she sees them. And it is precisely Furukura’s outsider status that throws these societal issues into such stark relief.

Personal Experience Affects How We Read

I really struggled to write this review, not because of the story itself (I loved it), but because of other reviews that I read. Most of these reviews were positive, and touched on a lot of the themes I too thought were interesting or important. However, when it came to reading reviewers’ opinions about Furukura, it’s like I had read a completely different book. I worried that the review I wanted to write would be misunderstood. As I thought about it though, the wildly different reactions to the main character seem to be a good example of how personal experience and knowledge can drastically change how you read a book and what you get from it.

Although it’s never explicitly stated in the novel, or in interviews with Murata, I read Furukura as an autistic character. In my mind she was autistic and I related to her. I think many other reviewers, however, may have missed Furukura’s probable autistic traits. Instead they labeled her behavior as something different. “Chilling,” “psychopathic,” and “depraved” were all adjectives used to describe Furukura and her lifestyle. It’s possible that these reviewers read quickly, reaching for a familiar shorthand to describe Furukura, effectively glossing over why she might act the way she does in order to focus on other themes in the novel. The fact that so many reviewers dismiss Furukura as a strange, aberrant woman without agency over her life seems an ableist perspective that tramples on a strong protagonist.

In Convenience Store Woman, we are presented with a potentially autistic woman as a main character, a welcome deviation from popular portrayals of autism which usually feature young white boys or men. One autistic author, in the only review that I completely agreed with, was thrilled to recognize someone similar to herself in Furukura and praised the novel for its diverse representation.

In a welcome reversal of the usual narrative, it’s the neurotypical (non-autistic) people of Convenience Store Woman who are stereotypes. This is part of the book’s charm. In one interview, Murata explained how when you switch perspective to that of a less conventional character it is “the so-called normal people […] who appear strange or odd.” We see the world through Furukura’s eyes: we see how she has organized the world for herself so it makes sense for her.

The ways in which Furukura experiences and interprets the world around her could definitely be described as autistic. She realizes that she’s different from an early age when she continually misinterprets social norms. As a child, Furukura is confused by the horrified reaction of her mother when she suggests taking a dead budgie she happens upon in the park home to grill for dinner. Her mother, in order to stave off the reproach of onlookers, insists they hold a mock funeral for the dead bird:

“Everyone was crying for the poor dead bird as they went around murdering flowers, plucking their stalks, exclaiming, “What lovely flowers! Little Mr. Budgie will definitely be pleased.” They looked so bizarre I thought they must all be out of their minds.”

Furukura, on the other hand, struggles to understand why everyone is so upset; the budgie is, afterall, a bird like any other they might eat. For Furukura, the bird’s funeral seems as absurd as holding a funeral for a pack of supermarket chicken.

Later in her childhood, Furukura resorts to distinctive courses of action in order to accomplish objectives, like when she hits a boy over the head with a shovel to stop him fighting with another boy. In her view, using violence to break up a fight made logical sense – she was using the same tool as the boys (violence) to affect a positive outcome (stopping a fight). Her thought processes make sense, they are just unexpected and sometimes socially problematic.

One Amazon reviewer called Convenience Store Woman a “marmite book,” a unique British saying which means “you either love it or you hate it.” It seems to me that some of the “marmite” quality of the book hinges on whether the reader picks up that Furukura could be autistic. Most of the reviews that I read never mention the possibility that she might autistic, but instead label Furukura as “frightening and robotic” or “latently psychopathic.”

However, that’s not at all the impression I got. Furukura is a woman who has been emotionally wounded by social misunderstandings and by repeated insinuations that she needs to be “fixed.” Her youthful social missteps lead to her suppressing her natural mannerisms so as to appear more “normal,” a strategy known as autistic masking. As a child she consciously decides to never say more than is absolutely necessary in any conversation so she won’t unwittingly break any social rules. She explains, “I would no longer do anything of my own accord, and would either just mimic what everyone else was doing, or simply follow instructions.” Furukura starts to mask in order to blend in and, heartbreakingly, “the adults seemed relieved.”

By the time she reaches adulthood Furukura has become an expert at conforming in different social situations. While visiting with her only friends outside the world of the convenience store, Furukura thinks, “It was the me with different clothes and speech rhythms that was smiling. Who was it that my friends were talking to? Yet Yukari was still smiling at me, repeating again how much she’d missed me.” It was the me with certain clothing and speech patterns that she is presenting as a mask to her friends. I think Furukura’s question, wondering who exactly her friends thought she was, hints at the tremendous amount of anxiety and mental energy that goes into autistic masking.

Furukura is a sharp and extremely perceptive woman, perhaps because she has had to work so hard intentionally studying human behavior in order to “fit in.” She has a way of cutting through society’s pretense to explain what is really going on, whether it’s calling out casual misogyny or considering the fact that everyone, to some degree, puts on certain masks in order to belong. In one whip-smart remark she observes how her coworkers masquerade in the store:

“It was fun to see all kinds of people – from university students and guys who played in bands to job-hoppers, housewives, and kids studying for their high school diploma at night school – don the same uniform and transform into the homogenous being known as a convenience store worker. Once the day’s training was over, everyone removed their uniforms and reverted to their original state. It was like changing costumes to become a different creature.”

She possesses incredible insight here and I can’t help but compare this to what so many autistic people often feel they have to do, and indeed what Furukura does throughout the novel: put on a mask to transform into the being known as a neurotypical person.

My knowledge and personal experiences definitely influenced how I read Convenience Store Woman. I appreciate and agree with Murata’s critiques of capitalism, misogyny, and Japanese society, though to me, social masking was the central theme of the book around which all the other themes orbited. Perhaps Furukura’s chameleon-like nature stems more from Murata’s personality and cultural upbringing than from an intentionally autistic portrayal. Nevertheless, many of the reviews which I read didn’t focus much, if at all, on the character’s social transformations, let alone the possibility that this could be an autism trait.

Just as Furukura struggles to understand and integrate into “normal” Japanese society, readers without more than a superficial understanding of autism could struggle with interpreting the character. Many prominent reviews feature vague references to Furukura’s oddities and extreme social contortionism without delving deeper into why she behaves in this way. I would like to suggest that if we read Convenience Store Woman from an autistic perspective or armed with up-to-date knowledge about the autistic spectrum, it will be a vastly different reading experience; hopefully one with more understanding and empathy for a neurodiverse protagonist.

Translated from the Japanese by Ginny Tapley Takemori