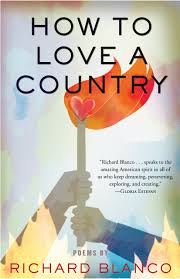 I read (and write) a lot of poetry. Some poems are an exotic hor’doeuvre, some are a rich and fanciful desert. Ricardo Blanco’s poems (I prefer the Spanish) are a full course dinner of steak and potatoes. You can’t read a lot of them at once as there’s so much meat packed into them. You have to chew and savor them one at a time.

How to Love a Country explores overtly political themes on belonging in America from the personal perspective of a gay Cuban immigrant. Ricardo worked as a civil engineer in Miami and wrote poetry at night. Despite his professional background, he calls himself a “working class poet.” He prefers the accessible to the obscure, using common tropes and symbols that anyone in America would recognize, but welded in the furnace of the personal and poetic that gives them an entirely different meaning.

Blanco’s identity as a gay man is routinely erased in public. In a recent interview with Krista Tippett for the On Being podcast she noted that he was a Cuban-American and immigrant poet, but failed to mention that he was also a gay poet. He had to bring it up himself twice during the interview. Two of Blanco’s poems, “Until We Could, for Mark” about his marriage to his lover, and “One Pulse, One Poem”, on the massacre at Pulse Nightclub, will not let us forget his other marginalized identity. The poem he read for On Being was “América” from City of a Hundred Fires, published in 1998. It is the kind of ‘loving a country’ that you would expect from a child growing up between two cultures, the hyphen of the Cuban-American. (You can read several of Richard Blanco’s poems online here.)

Blanco’s latest work is a masterpiece of poetic prose, both personal and political. One of his poems, “Complaint of El Rio Grande” is a political poem about national borders that separate and kill, running through a river that joins earth, sea and sky. Another poem, “Election Year” is almost it’s opposite: how his connection with nature is the most profound sense of belonging he has, while the “election” is nothing more than distant background noise. Another poem from this latest collection, “Mother Country”, is from the heart of an older man looking back on the circumstances of his patriation.

In the political darkness of the Trump era, when many of us question why we should love America at all, Blanco’s poetry struggles with his own sense of exile, of belonging and not belonging, here or anywhere, in any country. It would appear from his bio that the poems were all written during the Obama era, at a time when it seemed easier to love a country, especially this one—but that’s not so. Many of the poems were written in the first years of the Trump era, when the ugliness and strife of anti-immigrant hatred shred our national fabric.

Particularly notable is “Let’s Remake America Great”, which is overtly anti-Trump, but also sardonic and funny, full of pop culture references from the 50s and 60s. How to Love a Country doesn’t resolve that sense of tension and grief for a country we lost; it tightrope-walks the sharp edges of conflicting emotions. The very first poem in How to Love a Country, “Declaration of Interdependence,” is perhaps his most patriotic, but also most universal, arguing that regardless of political divides and national boundaries, we simply cannot survive without each other.

How to Love a Country will be the focus of our first Queer Theory Collective readers & writers group at Root & Press café, Sunday January 12 at 2 PM. Root and Press has copies available now.