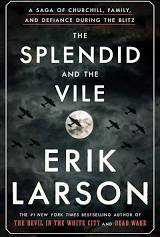 What was it Stalin once said? A single death is a tragedy, a million deaths is a statistic? Dates too, in the sea of history, can shed their essence and become empty numbers in the expanse of time. I thought a lot about this as I read Erik Larson’s The Splendid and the Vile, an account of Winston Churchill’s first calendar year as Prime Minister of Great Britain. Beginning May 10th, 1940, Larson chronicled the day-to-day experiences in Britain as Adolf Hitler turned his attention away from France and to the Isles of England, Scotland, and Wales. While Churchill is the focus of this narrative, Larson spends a lot of time chronicling the thoughts and emotions of the people around him, from his cabinet down to the common Londoner, using official government documents, diaries, and newspapers for his sources. What we are left with is a compilation diary that reminds us that some years, no matter how precise you measure time, are longer than others.

The first year of Winston Churchill’s duties as Prime Minister are probably the bleakest and most challenging years a modern-era leader has had to face. Rising in the ashes of Neville Chamberlain’s appeasement government, Churchill faced a multitude of challenges as he stepped into the role. Great Britain and France were allies as he took control of the government, yet, within about a month, his European allies would fall across Europe, leaving Great Britain alone in a struggle against Nazi-led Europe. World-wide astonishment at the swift defeat of France cannot be understated; within a month of taking power Churchill had to reconfigure “concrete” war plans that had been in place for over a decade.

As a result, German bombing on industrial targets began weeks into his tenure. Hitler sought to quickly overwhelm Britain with firepower, weakening the morale of the citizens, and pummeling the country to submission. If the Brits refused to surrender, Hitler would use the Luftwaffe to clear way for an all-out invasion, although seemingly no one in German high command thought this would be necessary. In addition, isolationist attitudes prevailed across the Atlantic in the United States, making it impossible for the American government to extend an outright hand of help to their English allies. Therefore, Churchill had to reconfigure his industrial output to use any and all capabilities toward defending the isles outright, while also attempting to rescue the Royal Expeditionary Force from Dunkirk, France. (Churchill himself they English would only be able to evacuate 50,000;  338,226 troops were eventually evacuated.)

What sort of man would look forward to this role?

Through all this, Churchill led with a bravado full of confidence. “I felt as if I were walking with destiny,” Churchill once wrote, “and that all my past life had been but a preparation for this hour and for this trial.” Larson argues, however, that the key to his leadership was not boastfulness but compassion. Churchill’s addresses to the world mixed a somber tone of the predicament with the tireless determination to resist that he was noted for. When he said he had nothing left to offer but blood, toil, tears, and sweat, he meant all four, and especially the third. He often wept in public when tough decisions had to be made, or when a city was bombed, or when a national tragedy was felt. “Poor people, poor people,” Churchill once said to a member of his government. “They trust me, and I can give them nothing but disaster for a long time.”

What kind of person can rise to that occasion?

Churchill was not a man of custom, Larson notes. He would probably rank number one in both a poll of most-hated and most-loved government figures in Britain before he ascended to Prime Minister. He had a long career in government, but until this point was probably most associated with a military failure in World War I at Gallipoli. He drank a lot, smoked a lot, drafted speeches in his bathtub, issued decrees in the nude, worked at all hours of the night, lambasted confidants and dueled with rival politicians. Many of these rivals were petrified of Churchill in leadership, fearing it would lead to a prolonged and disastrous invasion of the homeland. Larson went through the diaries of his closest advisors and we can see that even they were not initially assured that he was the man to lead them. Yet, as bombings increased from June to July, so too did his approval rating with the populace. By July, 1940, nine out of ten British people supported his administration and handling of the war.

Despite the central role Churchill plays in the book, it is the ordinary citizens that shine through the work. Larson’s seemingly endless accounts of the survivors of the bombing campaigns demonstrate a will to resist despite a continuous assault on homes, jobs, neighbors, families, and friends. How long their nights must have been, hearing a siren, looking in the distance, and retreating to their escape place, whether it be bathtubs, basements, or bomb shelters. Chatter in pubs among neighbors centered around if it were better to shelter on the bottom floors of homes to avoid the brunt of the bomb, or on top floors to avoid being crushed by collapsing debris. The most ominous nights were those with full moons when German bombers could stalk targets under darkness with no resistance from the Royal Air Force. Larson takes the title of his book not from the grand narrative of Good vs. Evil or Democracy vs. Nazism, but from a diary of a commoner on a beautiful spring dusk that would bring bombers: “It was magnificent and terrible: the spasmodic drone of enemy aircraft overhead; the thunder of gunfire, sometimes close sometimes in the distance; the illumination, like that of electric trains in peace-time, as the guns fired, and the myriad stars, real artificial, in the firmament. Never was there such a contrast of natural splendor and human vileness.”

Raids just in London, which did not begin in earnest until the fall, killed almost 14,000 people and caused injuries to over 18,000 people in 1940. Some towns, such as Coventry, were basically completely destroyed. The complete bombing of Coventry led to the development of a new word – coventration – parlance for the complete devastation of an area or city. While Coventry was a single mission involving hundreds of sorties, disaster areas were seldom the result of a single bombing mission. Usually, they were instead a protracted and prolonged campaign with repeated strikes on the same city over months. Churchill wept openly when he visited a bombed city, and for all his more pugnacious moments, these visits and tears let people know he cared. As one reporter at Coventry stated, “If he enjoyed waging the war let it be remembered that he understood the anguish of it as well.”

If you are interested in the military history of the Battle of Britain, this book also provides many illuminating technical highlights of bombing during WWII, especially from the British perspective. German bombers were restrained by a few things – they usually needed a fighter escort (who had less fuel capacity and therefore, time in the air) and they needed light in order to see their targets (except on those dreaded nights with a full moon.) Yet, British engineers were coming to the conclusion that the Germans were close to utilizing a beaming system that could fix a point for bombers to hit their targets in overcast skies and at night. This allowed them to develop countermeasures, such as jammers, or the capability to transmit decoy signals to German commanders. The tit-for-tat of technicians utilizing weapons systems is a fascinating story-within-a-story that had drastic implications for the development of the war on both sides.

I highly recommend a full reading the book, as Larson includes many details about Churchill family-life, Churchill’s inner circle, and travel protocols for his entourage during the war. Larson is a phenomenal writer and story-teller. I also highly recommend all his other work, The Devil in the White City, In the Garden of Beasts, and Dead Wake.

If you would like to purchase this book online AND support Root and Press, please click here.

2 thoughts on “The Splendid and the Vile by Erik Larson”